Today, the first Ukrainian electric truck was presented at plant No. 1 of Bogdan Motors (formerly LuAZ) plant. It was made to order and under the brand of the Danish company Banke, which specializes in the production of equipment for the utility sector. But it was developed in Ukraine and produced at the Lutsk enterprise.

The 3-axle electric truck for Banke is equipped with a set of batteries (220 kW / h) and has a cruising range of 220 km. It can reach a maximum speed of 80 km / h and is designed to work in the city. To this end, it has two pivot axles: front and rear, which significantly reduced the turning radius. The electric truck received a comfortable, low cab with a low-level floor in the style of the Mercedes-Benz Iconic, sliding doors, as well as a video review system. The cab of this truck is equipped with ventilation, heating and air conditioning. 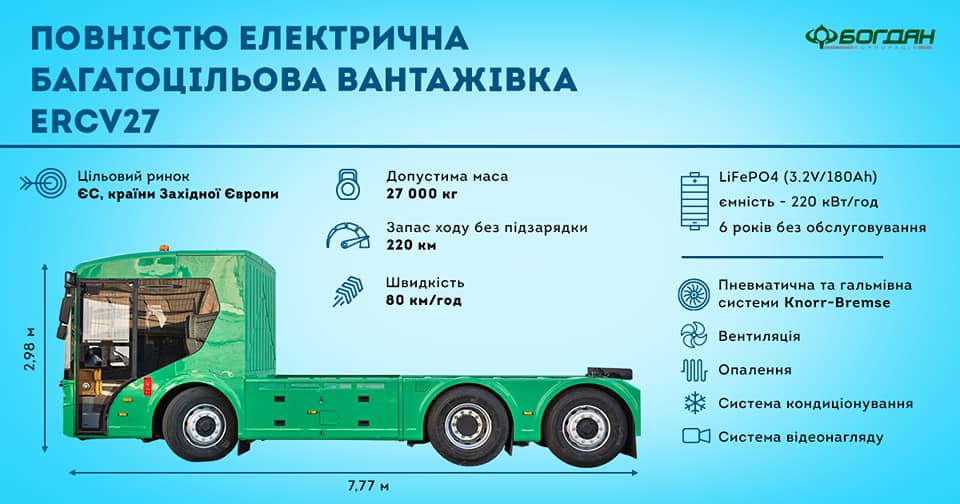 The Banke ERCV27 electric truck has a total weight of 27 tons and can become a chassis for the installation of any utility equipment. The fact that he uses electric traction gives him an advantage for use in European cities, which impose restrictions on the use of diesel technology in central and historical areas.

The production of such modern equipment at the enterprise opens for Bogdan Motors the way to the European market. Cooperation with the Danish company will provide a stable load for the company. The ERCV27 truck is waiting for certification in the EU ahead of time, and then its serial production will begin as part of a long-term contract with Banke Electromotive.

A detailed video of the Ukrainian electric truck can be viewed on our Facebook page tmginfo.net: